Through the Eora Journey, the City of Sydney has committed to significant works of public art in recognition of Aboriginal and Torres Strait Islander heritage and culture. This submission was the final work for the Eora Journey, culminating in a monument that addresses Sydney Harbour. I worked with the Sydney-based artist Jo Hurst for this proposal, for which we were shortlisted through to the final round of this competition.

The proposed work by Murrawari artist Joe Hurst consists of a flotilla of nawi canoes located just off the Western shore at what is now known as Mrs Macquarie’s Point. The nawi are to be a celebration of the Aboriginal people of Sydney; a culture that employed technology, craftsmanship and knowledge. At sunset the Nawi illuminate from within, in reference to the cooking fires and peoples they once carried.

The 9 nawi are represented of the clan groups whose lands bordered Sydney Harbour. The nawi-shaped craft’s formation changes in response to the tides and prevailing wind patterns. The north-west wind, Dooloogal, is the most prominent wind on the site and remains unchanged since earlier times. It is anticipated that this wind will have the most impact on the formation of the craft. The location is the rocky shorefront to the West of Lady Macquarie’s chair, the only natural rock shore frontage left within close proximity of the city. The floatilla of nawi stretch from the northern most tip of this natural rock shore frontage to the large rock overhang, connecting two important sites. The large rock overhang in the pre-contact era of the Eora was a sandstone shelter – the only remaining one that is accessible to the greater public in the city. Interpretive panels are to be located at these two locations to guide passers by as they walk along and engage with the nawi. This work is not to be monumental in nature but rather situated carefully on the site, requiring thought and attention. 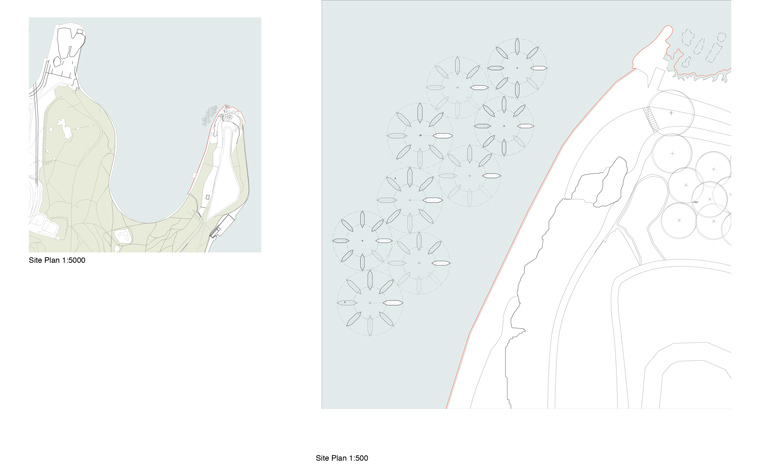 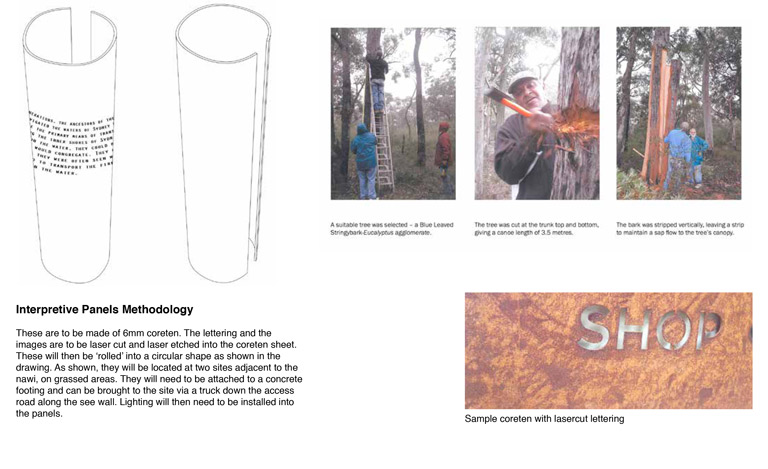